A funny thing happened to us yesterday.  After returning to from a wonderful brunch at the famous Commander’s Palace, we noticed that we had received a blog comment from a long-time reader of our sailing blog who we had never heard of.  Bill had left a comment that he and his wife, Renee, are from Seattle but are currently in Baton Rouge. They had stopped by our bus on their way to New Orleans and left a note with their phone number on the post in front of our motorhome. They would like to meet us and maybe have lunch.  How neat is that!

While we were disappointed that we missed them, we were hopeful that we could get together sometime before we left New Orleans by the end of this week.  Mary Margaret encouraged me to call Bill and Renee right away to talk about getting together.  This I did and discovered that they were still in New Orleans and could swing by on their way back to Raton Rouge around 4 PM. Since it was all ready around 3 PM, Mary Margaret and I scrambled around, tidying up LeuC and preparing a little snack of smoked salmon dip that my cousin Jerald taught me to make years ago.  It is really, really good!

Bill and Renee arrived armed with two bottles of wine and some snack goodies themselves and even though we had never met or communicated before today, it just seemed like we were meeting old friends.  They are both very gregarious and warm, as I like to think that we are, also.  The chemistry just clicked as we spent well into the evening talking and learning about each other. 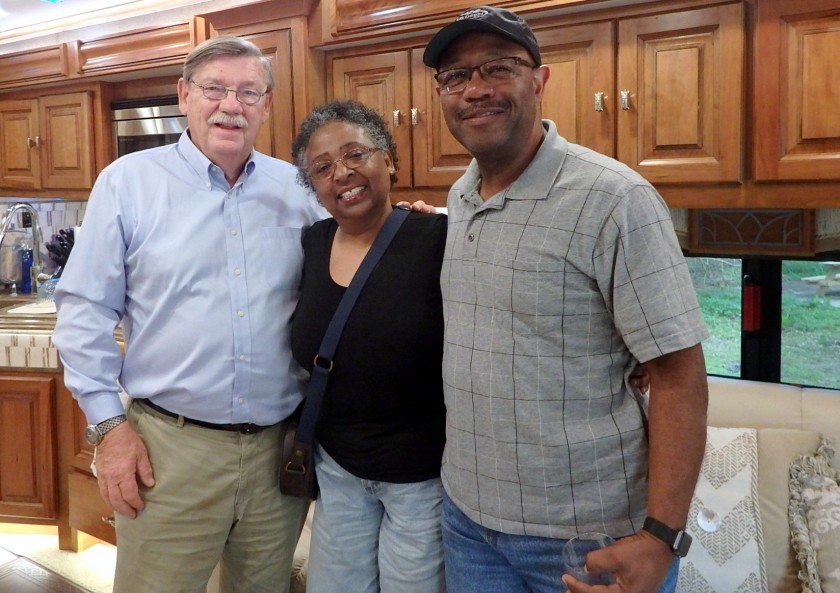 As it turns out, they are getting ready to sell their beautiful house in Seattle, buy a 450 Lagoon and begin their cruising lives in the Caribbean.  Boy or boy, are we envious!

We also learned that they too have a RV, a class C motor home, as well as a townhouse in Baton Rouge.  Renee’s mother and their son live their full time while their son is completing law school at Southern University.

Bill and Renee have been sailing for years and have a 32-foot Hunter which they keep in Lake Washington. They have sailed around the San Juan Islands and up to Victoria on Vancouver Island and over to the city of Vancouver.  They are now very excited about getting a catamaran and exploring the beautiful islands of the West Indies.  We get goose bumps just thinking about all of the great adventures that lie in front of them.

We enjoyed each other’s company so much, we decided to get together again today, with the four of us going into New Orleans to get some Muffuletta’s and talk some more.  Thus, late this morning, Bill and Renee drove back down from Baton Rouge, picked us up and off we went!

As with everyone who has visited to French Quarter, we loved returning and now armed with new friends, had a ball talking, walking and then introducing them to the Central Grocery and their wonderful Muffulettas.  We sat on a bench in the shade of the French Market Park and quaffed down the delicious sandwiches as we talked some more. 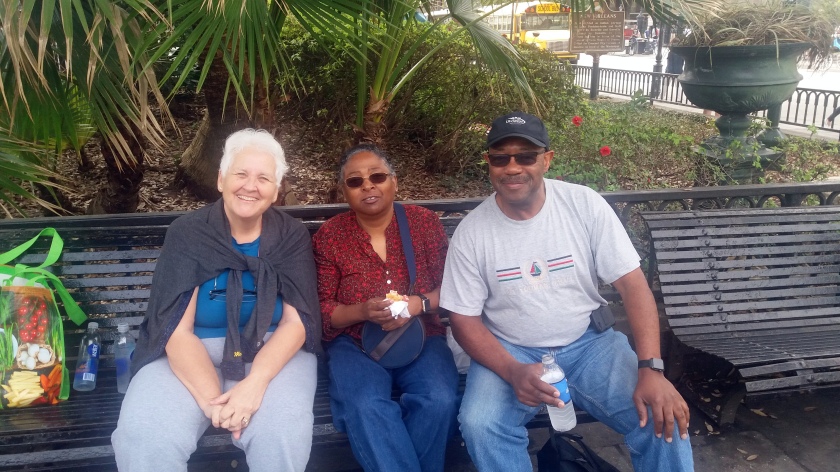 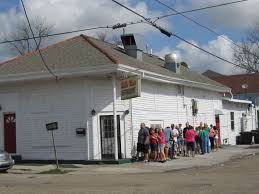 Even though we were full from the Muffulettas, this was just too tempting to pass up so off we all went.  Along the way we learned that Willie Mae’s was originally a bar that opened in 1957 in New Orleans’ Historic Treme neighborhood but had moved to its current location a year later.  The bar eventually closed and converted into a restaurant.  In 2005, Willie Mae’s was honored with the prestigious James Beard Award for “America’s Classic Restaurant for the Southern Region and soon afterwards became nationally famous.

Its fame was obvious when we arrived because we faced a long line to get in.  Since we were in no hurry, we got in line and spent our time talking some more and enjoying each other’s company.  Eventually, we were seated and when our fried chicken arrived, I had to admit, it was well worth the wait.  It was fantastic!

Now with our bellies bursting, we waddled back to Bill and Renee’s car and returned to LeuC, where we kept up our discussions that we all thoroughly enjoyed.  With the sun down and the night getting darker and facing a long drive back to Baton Rouge, Bill and Renee said their sad goodbyes.

Mary Margaret and I were so fortunate to meet Bill and Renee and were so happy that they reached out to introduces themselves.  We now have new friends and hope to someday get together again, maybe even on their boat in the Caribbean as they have invited us to visit them as they explore the West Indies.  Whoo Hoo!