After taking a day of rest, today we opted for another day of exploring.  This morning we hopped into our little Fiat and drove over to the Chalmette Battlefield, where during the closing days of the War of 1812, Andrew Jackson with a rag tag army, held off the attacks of the British Army.  The battlefield and the National Cemetery that is next door are part of the Jean Lafitte National Park.  The park is rather unique in that it is composed of 6 locations scattered around southeastern Louisiana, with each location having a different theme.  For example, one of the park’s locations is literally right next to our campground and is called Barataria Preserve.  It is a huge wetland made up of 23,000 acres of bayous, swamps, marshes, and forests.  It is where Jean Lafitte had hidden his lair which included over 1000 people who were part of his smuggling/pirate community.  We hope to explore that area next week in an airboat if the weather cooperates.

The Chalmette Battlefield is located downriver from New Orleans and along the banks of the Mississippi River.  As it turned out, the Battle of New Orleans was a decisive battle that ended up determining which country was to own the central part of North America that stretched from the Gulf of Mexico, following the Mississippi River, all the way north to what is now the Canadian border.  Under President Jefferson, a few years before the Battle of New Orleans, the US had purchased these lands from Napoleon for $7 million dollars.  However, when Britain defeated Napoleon and exiled him to Elba, they disputed his ownership of those lands.

Before Napoleon escaped from the island of Elba in February, 1815 and restarted the Napoleonic Wars, Britain decided to reclaim those lands Jefferson had purchased and, by doing so, would put an end to the US’ expansion to the west of the continent as well as cut off one of America’s major trade routes.  The port of New Orleans was ideally positioned for trade between the new American frontier and the markets of the world. The Mississippi River brought goods from the vast interior of the Louisiana Purchase territory to New Orleans where they were loaded onto ships and sent to the east coast of the United States and throughout the world.

In an attempt to rebuff the British, Jefferson had sent Andrew Jackson to New Orleans with a small contingent of militia from Kentucky and Tennessee.  Once there, he declared martial law and ordered the locals to join his forces to protect their city.  But the time the British arrived in December of 1814, he had formed a motely army of approximately 4000 men made up of civilian volunteers, local Indians, free blacks and his two small militia groups.  Jean Lafitte also negotiated with Jackson to get he and his men a pardon for their history of smuggling and pirating.  By getting this pardon, Lafitte then provided badly needed powder and ball, along with his men.

In December, the British had landed 8,000 men at the mouth of the Mississippi River delta 60 miles away.  They slogged their way through the swamps and arrived.  As Christmas approached, they had established a base just downriver of New Orleans.

The two sides first came to blows on December 23, when Jackson launched a daring nighttime attack on British forces bivouacked nine miles south of New Orleans. Jackson then fell back to Rodriguez Canal, a ten-foot-wide millrace located near Chalmette Plantation off the Mississippi River. Using local slave labor, he widened the canal into a defensive trench and used the excess dirt to build a seven-foot-tall earthen rampart buttressed with timber. When complete, this “Line Jackson” stretched nearly a mile from the east bank of the Mississippi to a nearly impassable marsh.

Despite their imposing fortifications, Lieutenant General Pakenham believed the “dirty shirts,” as the British called the Americans, would wilt before the might of a British army in formation. Following a skirmish on December 28 and a massive artillery duel on New Year’s Day, he devised a strategy for a three-part frontal assault. A small force was charged with crossing to the west bank of the Mississippi and seizing an American battery. Once in possession of the guns, they were to turn them on the Americans and catch Jackson in a punishing crossfire. At the same time, a larger contingent of some 5,000 men would charge forward in two columns and crush the main American line at the Rodriguez Canal.

Pakenham put his plan to action at daybreak on January 8. However, almost immediately the plan ran into problems.  The boats ferrying his men across the river so they could capture Jackson’s battery was pushed over a mile downstream, in the wrong direction, by the strong river current.  This ended up delaying them from reaching the battery for hours.  Instead of waiting for the battery to be taken, Pakenham’s main force moved on the canal near the swamp, British light troops led by Colonel Robert Rennie advanced along the riverbank and overwhelmed an isolated redoubt, scattering its American defenders. Rennie had just enough time to howl, “Hurrah, boys, the day is ours!” before he was shot dead by a salvo of rifle fire from Line Jackson. With their commander lost, his men made a frantic retreat, only to be cut down in a hail of musket balls and grapeshot.

Pakenham had counted on moving under the cover of morning mist, but the fog had risen with the sun, giving American rifle and artillerymen clear sightlines. Cannon fire soon began slashing gaping holes in the British line, sending men and equipment flying.  Jackson militiamen, using long rifles and having honed their aim hunting in the woods of the frontier, riddled the British lines before the British, armed with muskets, could come into the limited range of their guns.  Red-coated soldiers fell in waves with each American volley, many with multiple wounds. One stunned British officer later described the American rampart as resembling “a row of fiery furnaces.”

Pakenham’s plan was quickly unraveling. His men had bravely stood their ground amid the chaos of the American deluge, but a unit carrying ladders and wood fascines needed to scale Line Jackson was lagging behind. Pakenham took it upon himself to lead the outfit to the front, but in the meantime, his main formation was cut to ribbons by rifle and cannon fire. When some of the redcoats began to flee, one of Pakenham’s subordinates unwisely tried to wheel the 93rd Highlanders Regiment to their aid. American troops quickly took aim and felled more than half the unit, including its leader. Around that same time, Pakenham and his entourage were laced by a blast of grapeshot. The British commander perished minutes later.

With the majority of their officers out of commission, the British attack descended into bedlam. A few valiant troops tried to climb the parapets by hand, only to withdraw when they found they had no support. The British assault on Jackson’s battery across the river finally arrived and secured those cannons but it was too little too late. By the time the British seized the American artillery position, they could see the day was already lost.  At Line Jackson, the British were retreating in droves, leaving behind a carpet of crumpled bodies.  The day ended with the British losing over 2000 men dead, wounded for capture666666, including the majority of their officers, while the Americans had only lost 6 men dead and 7 men wounded.

Before we returned to our campground, we stopped by a seafood market area that is located near us.   It was composed of a number of small stalls and shacks loaded with little ice coolers containing all type of seafood that are unloaded from the various fishing boats that go to the Gulf each day.  OMG!  Fresh, fresh seafood, right off of the boats! 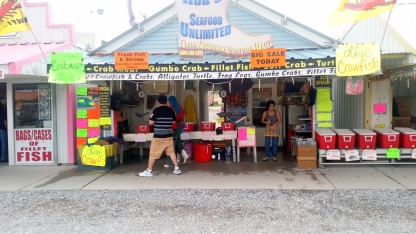 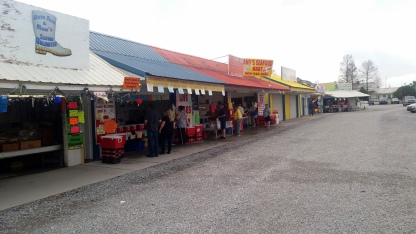 We ended up buying 2 pounds of extra large shrimp, a large container of shucked oysters, and shelled crabmeat.  Armed with these goodies, we ran over to the local Win Dixie supermarket to buy some cocktail sauce and baguettes.  When we got inside, we discovered that this was one of the 100s of stores that were being closed by the chain and it was having a 40% off sale to empty the store.  The word was just getting out to the locals as they were just started to flock in.  We were able to get a bunch of fresh steaks and some staples along with the cocktail sauce and bread that we came for.  We did not pig out with this unique sale because we had just a few days ago provisioned LeuC.

We returned to LeuC where Mary Margaret made an oyster casserole which include tons of Parmesan cheese, bread crumbs and garlic while I cleaned and boiled the shrimp.  I then made shrimp and crab cocktails.  Paired with white wine and French bread, we enjoyed a delicious seafood feast.  The oysters were so sweet and good and I can never get enough shrimp and crab.  By the time we were through, we had done ourselves proud!