Time here in Southern California has just flown by.  It probably is because we have been so busy running around fulfilling our appointments and trying to see as many of our old friends and former neighbors that we could.  In the few days we have been here, we have put on over 300 miles on our little Fiat!

Today was no exception.  It started with us driving back up to Lake Forest so our dentist, Dr. Sal, could make and install a crown on the post that was implanted into Mary Margaret’s lower jaw two days ago.  Today’s technology is just so impressive.  Dr. Dal used a 3-D scanner and then inputted the data into a computer which then shaped and cut the new crown.  45 minutes later, the crown was done, and Dr. Sal popped it into Mary Margaret’s mouth.  Ta Da! It was all done! Yea!

Next, we drove over to Paula’s house.  Paula is Mary Margaret’s former manicurist that she used for years and years when we live down here.  They have become good friends and she tries to visit her whenever we come down to this neck in the woods.  Paula is 76 years old but still works making hands beautiful.  This last year she has moved her business to her home and all of her faithful clients have followed her there.  She loves working out of her house as it is so convenient.

We left around noon and, at that time, we tried calling my former mentor’s wife, Barbara, to see if we could swing by to say hi.  Unfortunately, she was not home so it was a missed opportunity.

We returned to LeuC and grabbed some lunch and rested a bit, all of this running around is very rewarding but also exhausting.   While Mary Margaret stayed to do laundry, and rest her sore jaw, I drove over to Doheny to visit my cousin, Robbie, and his girlfriend, Kim.  Back in 1965, I spend a couple of months with my aunt and uncle and Robbie.  During that summer, Robbie taught me to surf as Doheny Beach used to be one of Sothern California’s top surfing spots.  However, since then, Dana Point to the north, built a huge marina and jetty which changed the wave patterns and Doheny lost it surf and stopped being a surfer’s haven.  Nevertheless, my memories of being a young teenager and surfing the summer away remains.  Such great times! 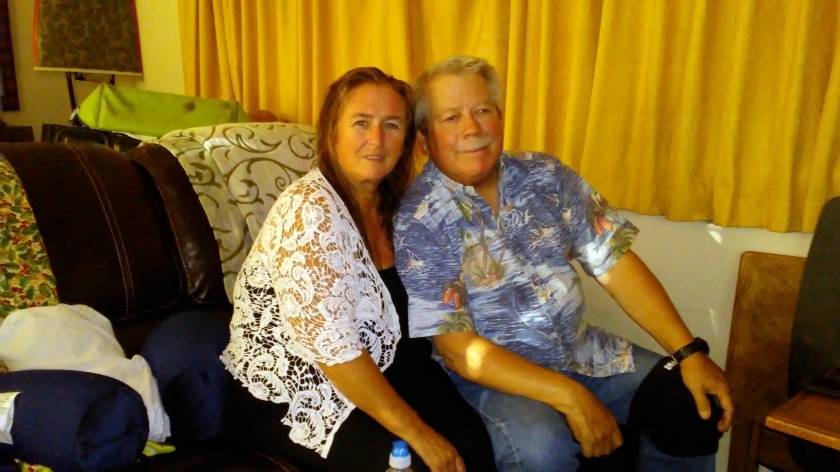 It was great seeing Robbie again and meeting Kim.  Robbie now lives in the house that my aunt and uncle owned and where I stayed back in 1965.  They built the house in or around 1950 and it was one of the first houses on the bluff overlooking Doheny.  Since then, numerous mansions have been built and the view is now blocked.  But the area is still so beautiful.

Tomorrow morning, we will bundle up LeuC and start our journey up to Sacramento.  We will take 2 days to make the 350 mile trip, stopping at the Harris Ranch to spend the night.