We were flummoxed this morning regarding what to do today.  We were a bit tired from being so active these last few weeks and wanted a day to just rest and give out a loud sigh.  To be a slug every now and again is pure joy after spending a period of time being so active.  On the other hand, there is so much to do and see here in the Albuquerque area and, with only one more day here, we did not wish to miss the opportunity to explore some more.  What to do?  What to do?

Once again, Mary Margaret came up with a great solution.  She suggested that we rest in the morning and explore in the afternoon.  Brilliant!

However, truth be told, we both cheated a little bit as she did a load of laundry while “resting” this morning and I snuck outside and worked a bit on the outside of LeuC.  Nevertheless, we both also “rested” some, pretending to be slugs.

After lunch, with rest time over, we hopped into our little Fiat and struck out to explore some more.  Our goal was to run over to the Petroglyphs National Monument and check out one of the three canyons that is littered with petroglyphs, some over 700 years old.

Once we arrived and parked we grabbed our water bottles and camera and started climbing the steep, rock strewn face of the canyon.  We were immediately greeted by a number of large basaltic boulders that were covered with petroglyphs.  As we continued up the canyon wall the views we had were wonderful.  It was another beautiful day with lots of sun and temperatures in the low 70’s.  Just perfect weather for climbing up the face of a canyon in hunt of petroglyphs.

As we climbed we saw a few signs that educated us on what we were seeing.  We learned that petroglyphs are more than just rock art or picture writing.  Instead, petroglyphs are powerful cultural symbols that reflect the complex societies and religions of the surrounding tribes.  The context of each image is extremely important and integral to its meaning. Today’s native people have stated that the placement of each petroglyph image was not a casual or random decision. Some petroglyphs have meanings that are only known to the individuals who made them. Others represent tribal, clan, kiva or society markers. Some are religious entities and others show who came to the area and where they went.

I will let the photos we took do the talking so you can see the remarkable sights we enjoyed. 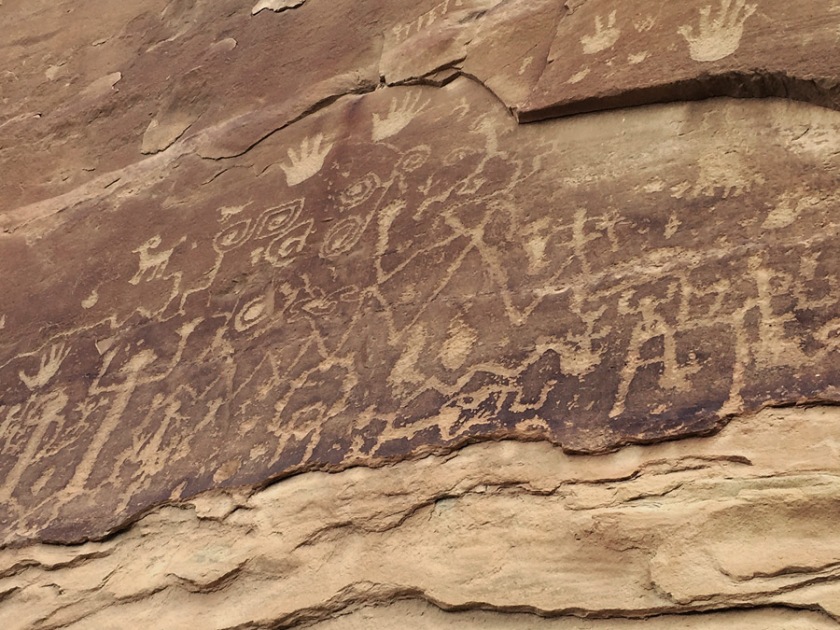 The climb up and down the canyon wall was a challenge at times but well worth the effort.  Once we returned to our car we decided to continue our explorations but, this time, we would stop off at the International Balloon Museum.   As we were planning our trip to Albuquerque, Mary Margaret had suggested that we look into taking a balloon ride since Albuquerque is renowned as one of America’s better locations for ballooning.  This rather shocked me since Mary Margaret is not a fan of heights and taking a balloon ride means being in a small gondola, hanging from a large balloon, thousands of feet in the air.  Hmmmm? What was she thinking?  She surprises me at times with her fearlessness and ability to stretch her experiences!

Alas, when I researched the availability of rides, there were none available that met our needs so it will be something that we will have to book well in advance of next visit.

The Balloon Museum ended up being free since we arrived so late in the day but was chocked full of neat exhibits and information.  One could easily spend at least half a day enjoying what it offered.  We only spent an hour or so but enjoyed it very much.

We return to LeuC and our campsite a bit tired but with smiles on our faces.  We ended our day with a delicious meal of spareribs, grilled to perfection and glazed with a deep layer of BBQ sauce.  Oooooo, so good!

Tomorrow we bundle up LeuC and head south to Columbus, New Mexico, to return to the Pancho Villa State Park.  It will be a 5 or 6 hour drive.