Our day started with Gabe Diaz, the local truck mechanic, driving up to our campsite this morning in Pancho Villa State Park.  He was soon joined by Martin (pronounced Mar-teen) Nunez, the gregarious park ranger who help us yesterday and Armando, another park ranger who had today off.

I explained to Gabe that a mule deer jumped into our path yesterday while we were doing about 50 MPH which resulted in LeuC’s ride being a bit bumpy and my suspicion that the air suspension bag on the front passenger side had lost air.

In no time Gabe slid under LeuC and disappeared from view.  After a few minutes, he confirmed that the bag was deflated but the sensor rod was still intact and not damaged.  He next inspected the air supply hoses and fittings as I turned on the air leveling system.  The airbag did not inflate but he did not hear any hissing which would mean a leak somewhere in the system.

We next opened the cowling at the front of the bus and he showed me the various solenoids that control and regulated the airflow to each of the four air bags, one for each wheel (note: the rear wheels are tandem wheels but each tandem set only have one air suspension bag).  He shared with me that the problem was either the solenoid that controlled the airflow to the front passenger side or the module that regulates all of the solenoids.  The module is a computer that monitors the road conditions constantly and instantaneously decides which wheel suspension system gets more air or releases air to keep the ride smooth and level.  Holy cow, what a complex and intelligent suspension system!  We now have a better understanding as to why we usually have such a remarkable smooth and even ride.

He decided to pull each wire leading to each solenoid and then reconnect the respective lead to its solenoid.  He then had me restart the air suspension leveling system.  On LeuC, when we park and set up the bus for the night, we can level the bus using either a set of jacks that are run by a hydraulic system or we can use the air suspension system to keep our floor flat and level even through the ground is uneven or sloping.  It is simply amazing to us that we have such options with each system controlled by its own computer. 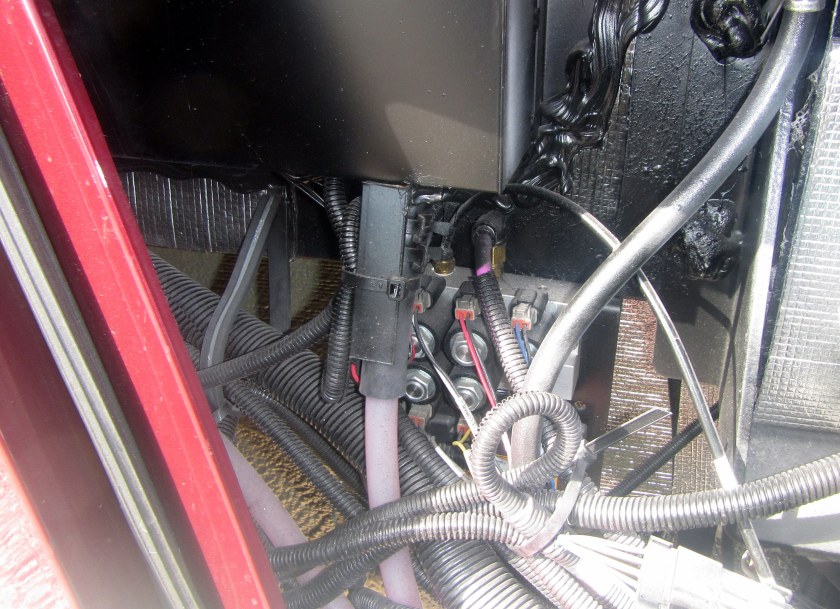 As it turned out, the front passenger suspension bag now began to fill with air and soon LeuC’s floor was flat and even.  Whoo Hoo! Problem found and solved!  It was just a wire connection which had come loose due to the whomp of the bus hitting the mule deer at 50 MPH.

Next, Gabe spent about 1/2 hour realigning the front cowling which the deer had bashed into.  Thus, after about 2 hours, Gabe had LeuC all fixed and beautiful once more!  Mary Margaret’s and my feet were doing our respective happy dances!  Double Whoo Hoo!

I asked Gabe what the bill would be and he scratched his head and suggested $65 dollars.  Wow!  I was so pleased with what he was able to do and so quickly that I paid him $75 and threw in a nice cigar as he had ruined the one in his shirt pocket when he crawled under the bus. 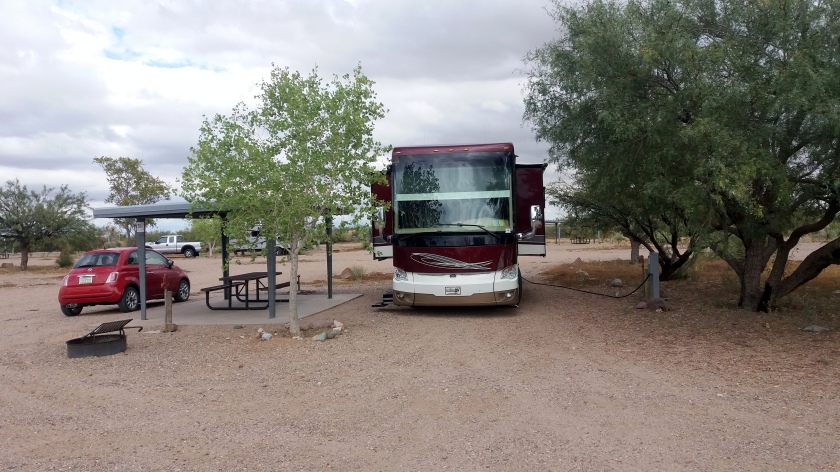 I shared with Martin that we would be on the road within the hour and I saw a look of disappointed pass over his face.  We had bonded while Gabe worked his magic and Martin was sad to see us go so soon. I quickly explained that we had to be in Denver in 7 days but we were planning on returning in late October to better explore this beautiful area.  He then suggested that we swing by his museum on our way out as he would open it up especially for us.  Mary Margaret and I immediately agreed and started getting LeuC ready for our drive up to Elephant Butte State Park.

When we arrived at the museum, Martin was there to greet us and then proceeded to give us a personal tour.  It was a very impressive museum for such a small town, filled with a 1916 Curtiss JN-3 (Jenny) airplane hanging from the ceiling, cars used by the US Army while camped in Columbus during Pancho Villa’s attack, a replica of a tent which was outfitted similar to the city of tents that the Army had in its camp, machine guns, lots of exhibit signs explaining how and where the three attack pincers that Villa led hit the Army camp and town and an hour by hour timeline of the events.  There was even a replica of an armoured car that General Pershing was so famous for.

This is the 1916 era armoured tank that General Pershing and his 10,000 troops used to chase Pancho VIlla into and through northern Mexico.

When we left, Martin was kind enough to give us his card and told us to call him a week or so before we would arrive so he could reserve a campsite for us since the snowbirds are in the process of coming into New Mexico and by mid-October, the park’s busy season begins.  How great is that!  Such a nice man!

We then said our goodbyes and once again headed down the road.  The beautiful sea of grass and scrub bush greeted us as we stuck to the backroads going north.  We marveled how the topography slowly changed from wide open range lands to gentle rolling hills leading up to the Rocky Mountains. 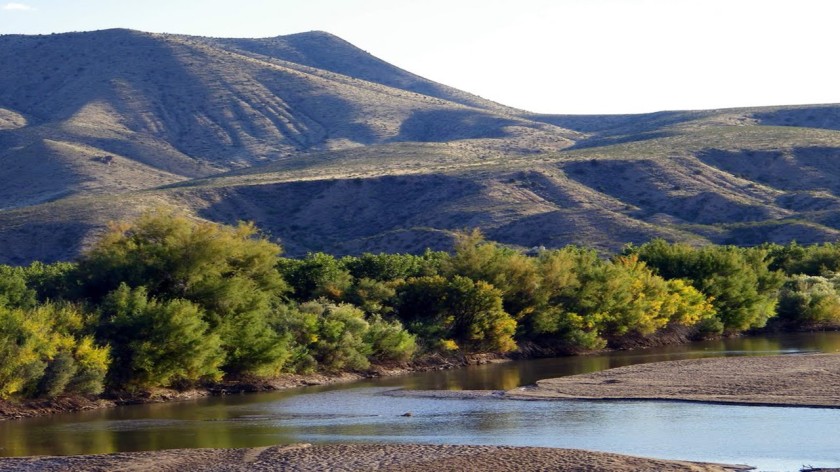 Around 1500 we arrived at our next destination, Elephant Butte State Park, near the historic town of Truth or Consequences.  It is a sleepy little town and is the only one that I know which renamed itself in 1950 after a famous radio show of the same name.  Go figure!  Its original claim to fame was its hot spring baths of the 1800s. The state park overlooks the long Elephant Butt Lake, which is dammed at one end.

After we set up LeuC for our two night stay, we decided to return to Truth or Consequences for an early dinner.  We found a quaint little café called “A Little Bit of Heaven” and ended up being befriended by the owner and his aunt.  We had a wonderful time chatting up a storm only topped by the absolute best tacos we have ever had!  Ben had learned his recipe up in the high mountains of Mexico where he was adopted for a year by an Indian family who lived in a remote village.  He first starts with a corn tortilla cover with queso (Mexican cheese).  Next comes another tortilla with a large mound of carne asada (seasoned shredded beef), some lettuce, cilantro, an avocado slice, and a slice of mango.  You then top it was the most delicious mango salsa that has just a hint of chili peppers.  We died and went to heaven! 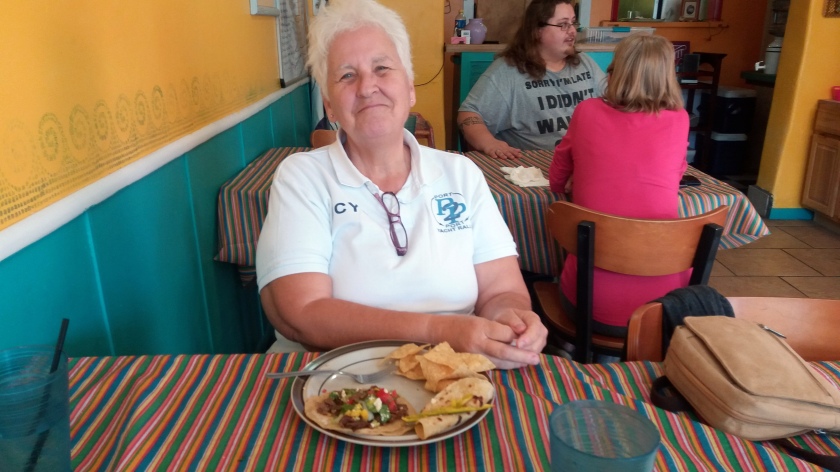 What a day!  We had LeuC fixed, a personalize museum tour, a simply beautiful drive up the open lands of New Mexico, a remarkable dinner and it was all topped with meeting the nicest people.  Whoo Hoo!