Today, we returned to LeuC after spending a three-day weekend back in Ann Arbor, Michigan.  For the first time since our daughter, Heather, was in school in Ann Arbor, we went to a University of Michigan football game.  Heather, following in the footsteps of her parents, graduated with two degrees from Michigan.  In 2000, Mary Margaret and I went to visit her and, in the process, took in a football game.  That year Michigan won the Big 10 Championship, tying with Purdue.  Its coach was Lloyd Carr, whose 1997 team won a National Championship.  Ahh, those were the days. For the last 10 or so years, our team has struggled under three different coaches.  During this period, it did have a few years where it returned to the glory of the good old days, but, overall, it has underperformed and disappointed.

This year started out no different with an ugly lost to Notre Dame last week, losing 24 to 17.  The game was not as close as the score would indicate.

This weekend, we played Western Michigan, a team that is not of the same caliber as Notre Dame.  We won 49 to 3.  We are not sure what the significance of that the score means, given how poorly we played in our first game.  Nevertheless, it was a hoot going to the game and watching our alma mater play and win.

Traffic and parking in Ann Arbor during game day is horrific.  The only way to avoid the mess that is created is to arrive early and leave late.  Thus, with the game scheduled to start at noon, we left our hotel near Lavonia, a suburb west of Detroit, at 8:30 in the morning and arrived in downtown Ann Arbor at 9.  We walked around Central Campus a bit and stopped for a Coke and a milk shake to amp up for the day ahead of us.

The gates to the stadium opened at 10 and we arrived right as they were unlocking the gates.  If we were not the first ones in, we certain were one of the first 100 people in.

We found our seats on the 40-yard line, 37 rows up from the field, which offered a great view of the field and of the game.

It was great taking in all of the pre-game activities, including watching both teams warm up, the two bands arriving, the teams taking the field to start the game and the two jets flying so close overhead during the playing of the National Anthem. 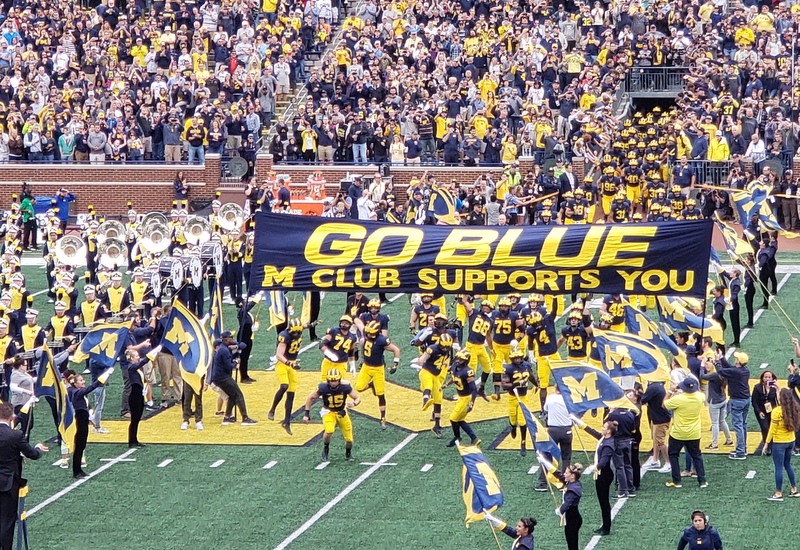 The game went well for the good guys and we enjoyed talking with our neighbors, who happened to be fans of Western Michigan.  Go figure!  They were so nice and shared with us that with this game, as with other games they have attended in previous years, they have found the Michigan fans to be so nice.  That gave us a warm feeling hearing other saying such nice things of Michigan and its fans.

After the game was over, we stayed to watch the two bands perform and then walked the mile or so back to the downtown area and had dinner at Shalimar.  It is an Indian restaurant that Heather had introduced us to and that we had so enjoyed 18 years ago.  We were not disappointed as the food was still wonderful and the service was great.

It was a fun weekend and we both so enjoyed being at a live football game which brought back such fond memories.  However, it is nice being back home with LeuC.  Nothing can replace one’s own bed and the warmth and familiarity of one’s home.

Tomorrow, my cousin Steve will be coming over to share a BBQ ribs dinner that we will be cooking.  Mary Margaret will be topping the meal off with dessert of blueberry buckle.  Yum!