We left our campsite near Confluence, Pennsylvania today and headed down the road towards Burnsville, West Virginia.  As we worked our way through heavily forested country roads, going up and down mountain ridges and weaving over the winding country roads, John Denver’s song “Take Me Home, Country Roads” was playing in my head.  If you are not familiar with that 1970’s hit song, you can listen to it here.

We got a bit nervous at times as we passed by road signs posting weight limitations that were about half of LeuC’s 20 tons.  In fact, in one instance, we refused to follow the GPS generated suggested route because the road looked way too narrow, windy and steep.  Furthermore, it was posted with a weight restriction of 10 tons.

Instead, we continued down the road we were on, keeping our fingers crossed that it would eventually take us out of this mountainous terrain and drop us near I-68, the freeway that would take us near our next stop at the Bulltown Campground near Burnsville, WV.

At times the views were breathtaking with rolling ridges of the Allegheny Mountains before us. 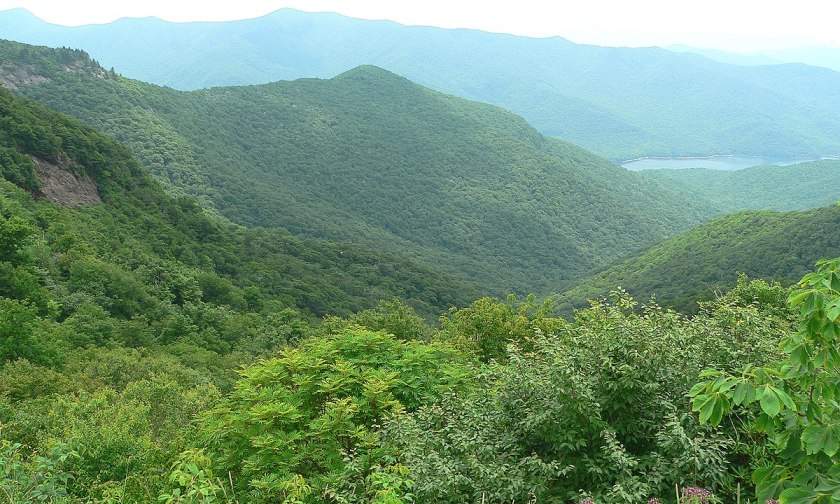 At other times, there was white knuckled excitement as the narrow country lane plunged down steep ridges with sharp curves, no guard rails, and ravines that if you fell into, no one would ever know.  Fortunately, we have become rather good in keeping LeuC on roads which are narrow, windy, and steep with deep, plunging banks. Part of the secret of doing this is keeping the speed well under control and using as much of the center of the road as you can.  The other part is having the navigator keeping eyes peeled on what is in front of us to see if another vehicle is heading our way just past the curve that is in front of us.

After 45 minutes of such fun, we spied and then pulled into a gas station that was in a little town next to the freeway.  After we put LeuC into neutral, pulled on the air brakes and shut off the engine, we both looked at each other and took a collective big sigh of relief.  Another driving adventure behind us!

The next hour or so was easy peasy as we boogied down the freeway, past Morgantown, WV, driving deeper and deeper into West Virginia.  We then left the freeway and returned, once again, to the narrow country roads as we made our way to Bulltown, WV.

Bulltown actually no longer exists.   Nevertheless, it is the location of the Corp of Engineer’s recreational area that houses our campground.  It is also the former site of where Captain Bull, a Delaware Indian chief, had set up a camp and was massacred by a white settler who had his wife murdered by Shawnee Indians back in the 1700s.  He had mistaken Captain Bull and his tribe of Delaware Indian for the Shawnees. Captain Bull was actually well liked by the locals who lived near what they called Bulltown because he and his tribe discovered a salt deposit and would trade his salt for food and goods.  I will get into this history in my next blog.

We have now setup camp and I have also discovered that I can buy Internet time from the campground.  Since there are not cell towers that reach down into the valley where we are, it pains me to say that I bought access at an outrageous cost.  Actually, it would not be so bad if the Internet connection was reliable but it keeps dropping, which makes uploading the blog and pictures very frustrating. 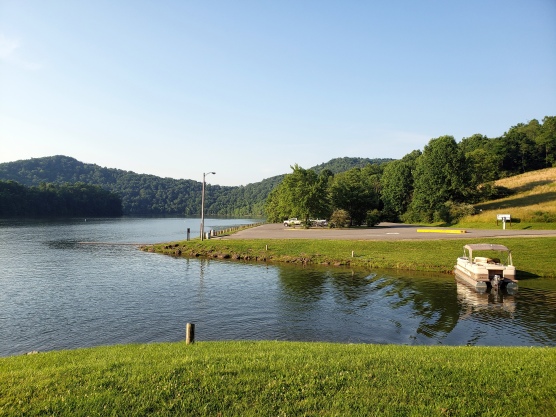 Just another day in the lives of RV nomads….