Originally, we had planned on spending a day at Colonial Williamsburg.  It is the historical district of Williamsburg where they have preserved or restored many original colonial era buildings and homes.  However, we enjoyed these last couple of days exploring Jamestown and Yorktown so much that we decided to skip Colonial Williamsburg and return to see parts of the museums at Jamestown and Yorktown that we missed.  Our logic was that we had been to Colonial Williamsburg before when we lived in Delaware way back during the late 1970’s and early 1980’s and it most likely has not changed that much since then.  With this being our last day before we move on to spend a couple of weeks in the Washington DC area tomorrow, we wanted to fully explore Jamestown and Yorktown since we enjoyed what we did see so much.  Thus, this morning we hopped into our cute little Fiat and put-putted down the road, headed off to the ferry to cross the James River one more time.

We first stopped at the Jamestown Museum and finished wandering through their galley of time, taking the time to more carefully read and enjoy those exhibits we had missed.  After lunch in their cafeteria, we then drove over to the Jamestown National Park, where the actual site of Jamestown is located.  While it is a national park, it is also an active archeological dig site and when we were there, we watch a few people carefully doing a dig.  Despite what we were told at the Museum, the National Park Service has recreated parts of the original site including the wooden walls that surrounded the original settlement.

The original settlement was situated on a piece of ground that was between the James River and a swamp.  Not the best place to live and the swamp and brackish water of the James is what led to the deaths of so many of the settlers.  You can see the stockade in the background toward the left. 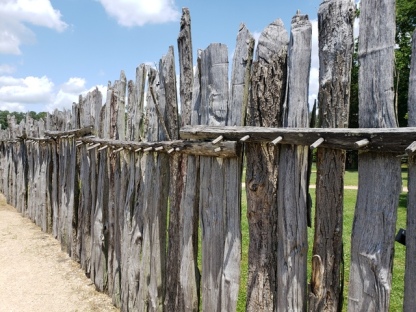 Here are some of the information signs that I captured. 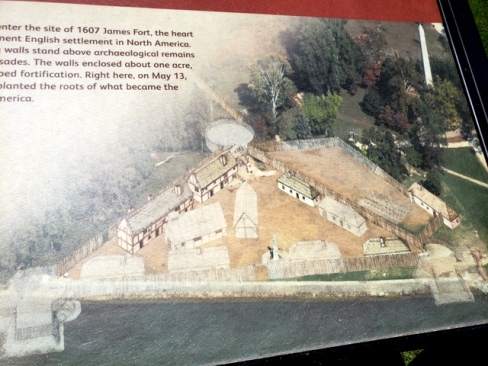 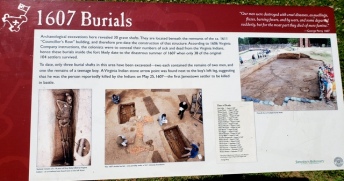 Here is the church that was built in 1906.  However, it was built over the foundation of another church, which was built in 1617,  They are in the process of doing an archaeological dig inside this church to uncover artifacts of that earlier period.

Here another area that is undergoing ab excavation.

A mockup of what the original settlement looked like back in 1607.

We next drove back to Yorktown to revisit the museum there.  As we entered, we discovered we were just in time to take in another lecture, this one being on Alexander Hamilton.  A few years ago, I read Ron Chernow’s biography on Hamilton and really enjoyed it.  Thus, we both were anxious to hear the lecture.

The lecture was wonderful, albeit short, only about 35 minutes.  It refreshed my memory on some of the details of Hamilton’s life that I had forgotten.  He was a most remarkable person and played such an important role in the founding of our country.  This included being the principle interpreter between Washington and General Rochambeau, the French commander of French Troops in America during the Revolutionary War.  He also wrote 51 of the 85 essays that composed what become known as The Federalist Papers.  These were written with John Jay and John Madison to promote the ratification of the Constitution.  Hamilton is probably best known as the one who set up the First National Bank of the United States and created our country’s currency and help extinguished the huge debts that each of the 13 colonies had as a result of the long war.  He did so much more but a discussion on that may, someday, be part of another blog.

After the lecture, we then went into the museum’s galleries and enjoyed exploring them.  The galleries are set up along the critical time periods of the Revolutionary War and contain a variety of multi-media, extractive exhibits that are wonderful.  There are also a number of movies that you can sit in on, including one where the seats shake with each cannon that is fired and where the wind blows on you as the sea battle between the French and the British takes place near the mouth of the Chesapeake Bay.  It was pretty cool!

Here are some of the photos I took of a couple of the multimedia exhibits.

By now, it was late in the afternoon but we still had one more stop to make.  Thus, we hustled back to the ferry, crossed the James River one last time and arrived at the Edward’s Virginia Smoked Ham store in Surry, Virginia.  This is the home store where Edward’s was founded.  It is a famous chain of outlets that distributes various types of Virginia Smoked hams which are made in Surry.

We left armed with a bundle of hams and a pocket that was cleaned out of money.  Nevertheless, we had big smiles on our faces knowing that these rich and succulent hams were now in our possession.