Due to a late start this morning, we opted not to go into Savannah today but, instead, stayed local and explored the museum and earthen fort that is here in our state park.  As it turns out, Fort McAllister was a key fort that played an important role in protecting Savannah during the Civil War.

Built in 1861 at Genesis Point, the fort was constructed on the plantation of Lieutenant Colonel Joseph Longworth McAllister, for whom it was named. Fort McAllister provided protection from the U.S. Navy for the southern flank of Savannah, about fifteen miles to the north, during the Civil War. It also afforded defense for the productive rice plantations of the lower Ogeechee River basin, and for the Savannah, Albany & Gulf Railroad Bridge, a key transportation link, farther upriver.

The earthworks, made up of mud and sand from the surrounding marsh, were designed by military engineers to absorb considerable punishment from Union bombardment. The fort was built chiefly for defense against naval attacks, rather than against a landward assault. Fort McAllister had ten large-caliber guns and facilities for the heating of “red-hot shot,” cannonballs that, when striking their targets, could set wooden warships ablaze.

Shortly after being built, General Robert E. Lee, then commander of the Confederate Department of South Carolina, Georgia and Florida, visited the site and made recommendations to its design that enhanced its ability to protect the waterway from attacking Union ships.

During 1862 and 1863, Fort McAllister repelled seven Union naval attacks by elements of the blockading forces offshore and in nearby Ossabaw Sound. Several of these attacks were made by the latest in naval warship technology, including the ironclad monitors USS Montauk and USS Passaic. One of the casualties of the Union assaults was Major John Gallie, Fort McAllister’s commanding officer. One of the cannon balls took off his head.  The fort sustained damage to its earthwork walls, but the guns of Fort McAllister managed to drive off the Union attackers each time they came upriver to bombard the fort. Blasted sections of the fort were repaired each night with dirt and marsh mud.

In early 1863 the Confederate blockade-runner, CSS Rattlesnake (formerly the CSS Nashville) took refuge in the Ogeechee River. After taking on a load of cotton, it was grounded on the mudflats not far from Fort McAllister. Union gunboats proceeded to fire on the Rattlesnake from long range across the marsh and eventually set her on fire. The Confederate vessel and its cargo were completely destroyed.

McAllister never fell to Union naval forces because of its unique earthen construction. This was in sharp contrast to the much larger and supposedly impregnable Fort Pulaski at nearby Cockspur Island, which fell after less than thirty-six hours of bombardment by Union forces using newly developed rifled artillery. Rifling, the addition of spiral grooves within a gun’s barrel, made these weapons especially effective against Fort Pulaski’s masonry fortifications.

The Union land assault on Fort McAllister occurred on December 13, 1864, with over 4,000 men attacking just 230 men defending the fort.  The battle was brief, lasting just 15 minutes but was very intense.  The key to the Union’s success was that they discovered that the palisades that lined the trench which surrounded the fort, did not extend past the high tide mark.  At the time of the attack, it was low tide which exposed a way around the end of the palisade and an easy way into the fort.  Federal infantry poured across this route and resulted in intense fighting within the fort.  Sherman observed the successful attack from a vantage point atop the rice mill of the Cheves Plantation across the river. Following the surrender of Major George W. Anderson’s force, Sherman and members of his staff landed at Fort McAllister by boat, and they made contact with the Union naval forces in Ossabaw Sound.

For the remainder of the war, Fort McAllister served as a prison for Confederate soldiers captured on the upper Georgia coast. After the war, the fort fell into ruin and remained so until the late 1930s, when it was restored as a historic site for the public through funding provided by Henry Ford, who owned the property at that time. Fort McAllister is now maintained by the Georgia Department of Natural Resources as a state historic park with a museum.

Here are the pictures that I took while we walked the fort which is in excellent condition.

These are the palisades that are sticking up inside a deep ditch that encompasses the land sides of fort.  However, since they stopped at the high tide line on the Ogeechee River, the Union troops were able to bypass them because it was low tide at the time of the attack.  This allow the Union troops to storm the fort without having to tear down the palisades with the potential resulting heavy casualties. 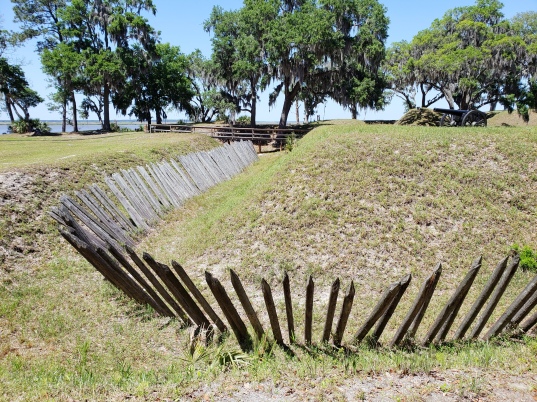 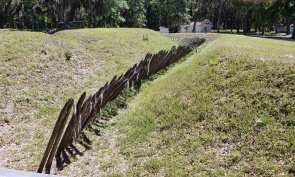 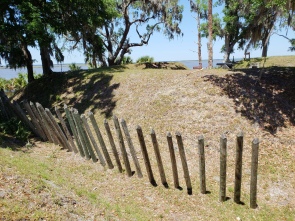 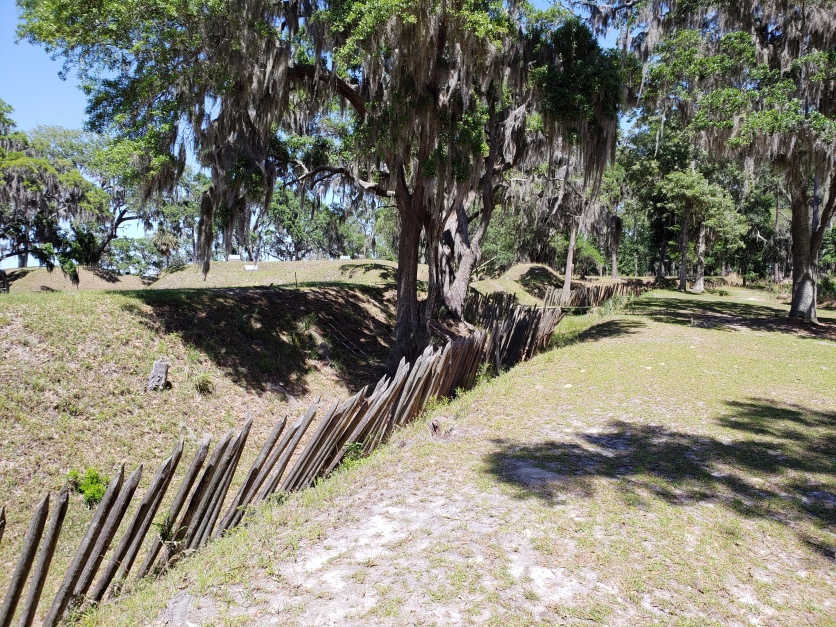 The is an earthen works fort, being made up of sides and mounds of mud and sand taken from the adjacent marsh. 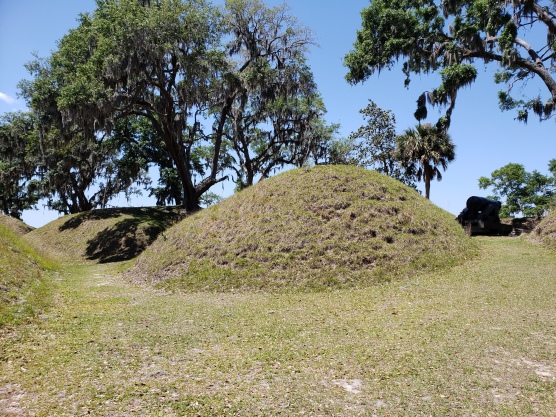 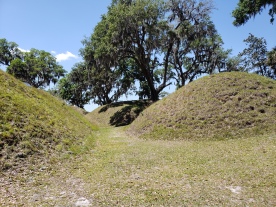 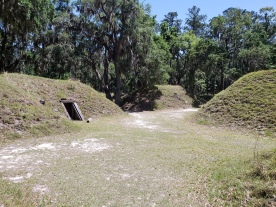 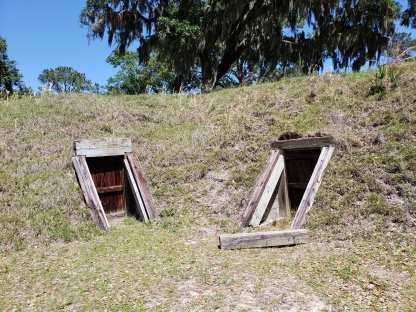 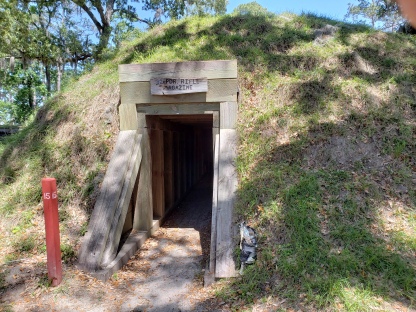 One of the mounds housed the hospital, containing over 30 beds. 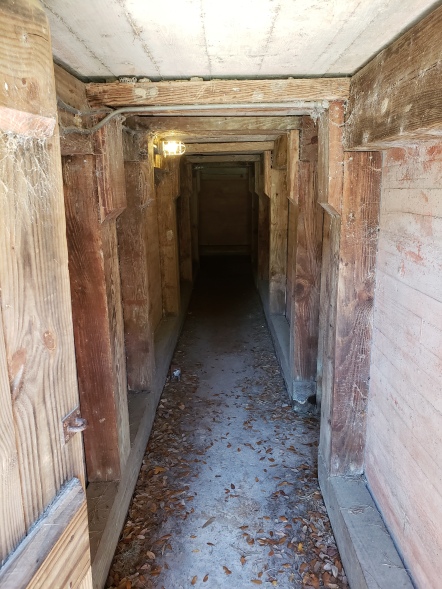 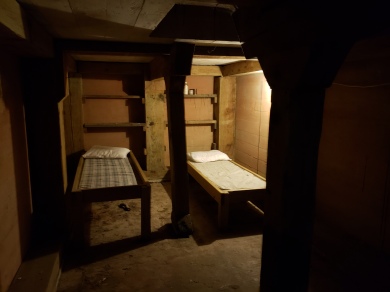 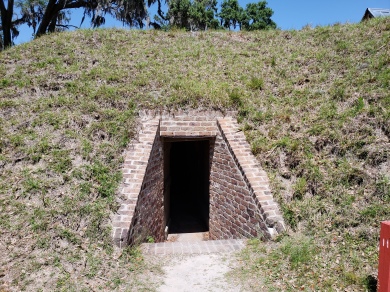 Other mounds houses the gunpowder and fuses used by the cannons. 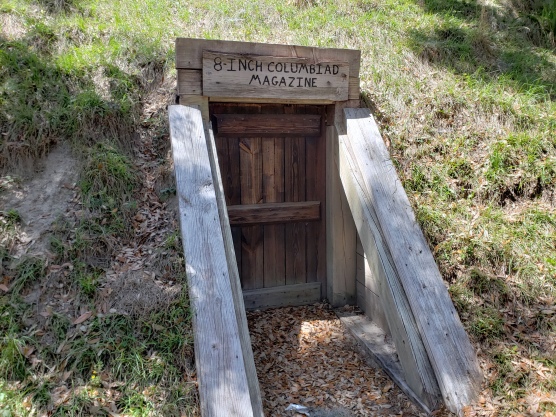 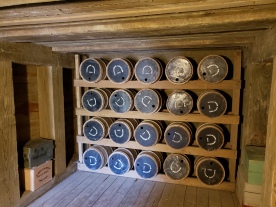 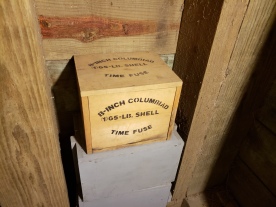 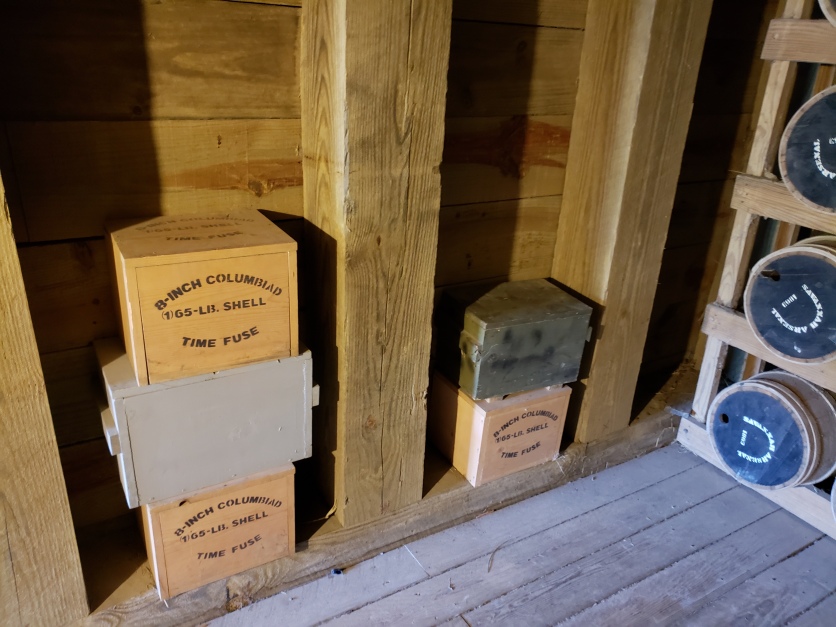 There were a number of cannons placed in the berms that protected the fort. 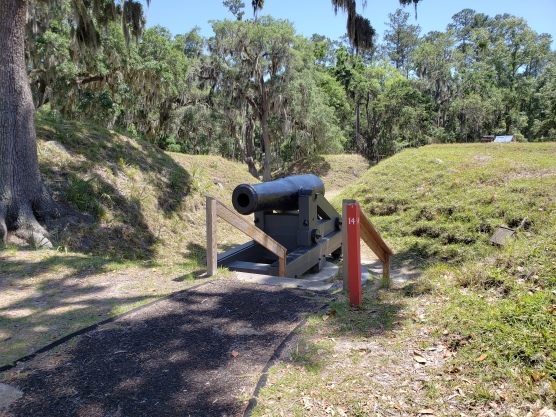 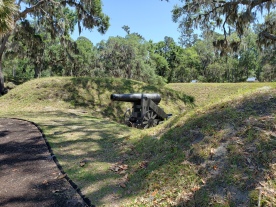 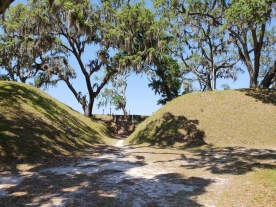 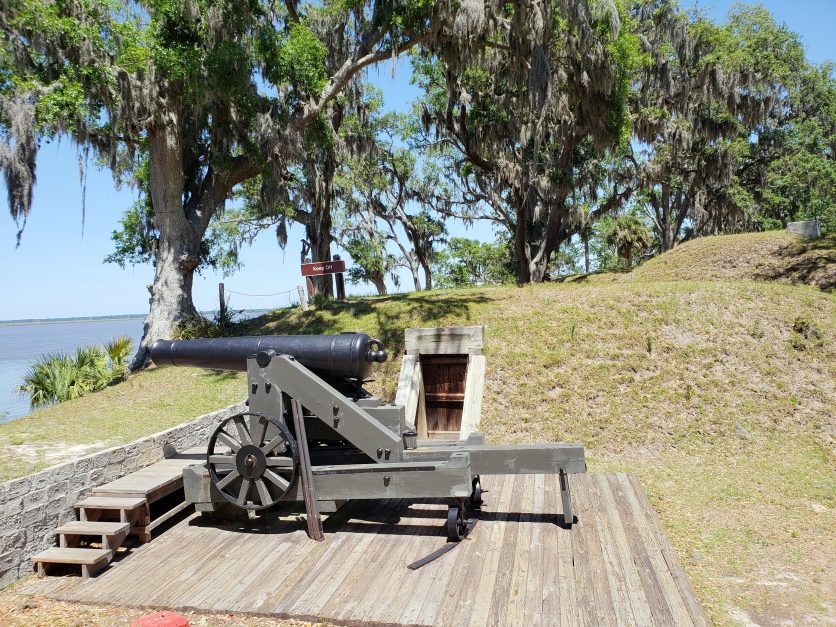 The commander of the fort and his senior offices were housed here. 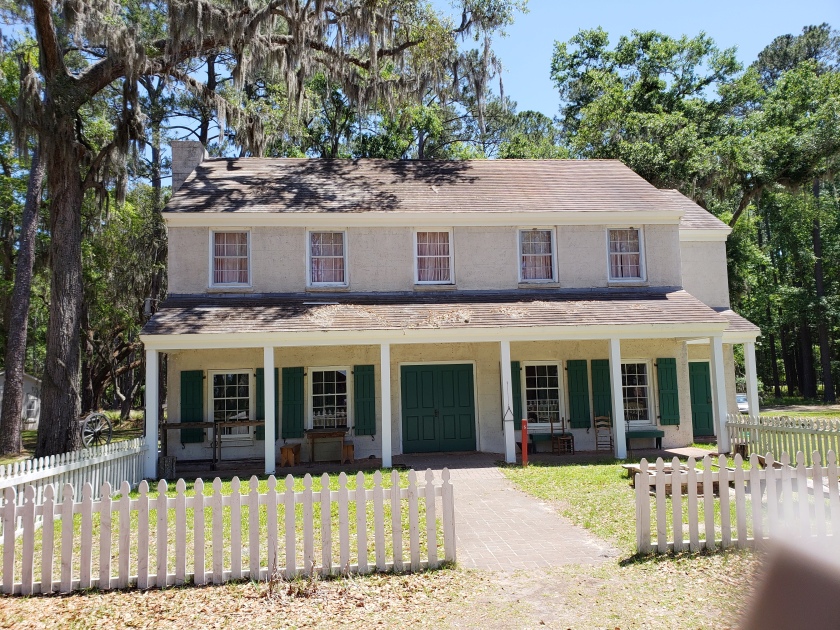