Today the skies were blue and the sun was shining brightly.  After such heavy rains and flooding, having a day of beauty was so nice.  It is the second straight day without rain and the ground around our campsite had dried out well.  It motivated us to get out and go hiking in the rural woods of Wisconsin.

We were excited to explore the ancient sea stacks that loom high and dominate the landscape around us.  They are the remnants of ancient Lake Wisconsin, a large glacial lake that covered this area during the last glacial age about 12,000 years ago.  The lake lasted a few thousand years until an ice plug broke in the Wisconsin Dells area, to the east of us, draining the lake in days as the water gushed out, carving the remarkable geography that makes the Wisconsin Dells so unique.

The ancient lake, when drained, left a series of sea stacks along its margins.  The sea stacks were formed as the wind and waves eroded the layers of limestone and sandstone forming haystack shaped columns that remain today.

The first sea stack explored was Mill Bluff.  Our park is named after this sea stack and wraps around it.  A short trail leads to 233 rock steps that climb to the top of the bluff.  The steps were built back in the 1930s as a make-work project during the Great Depression.

The last time I climbed such steep steps was three years ago when we had sailed from South Africa and landed in Jamestown, St. Helena: a small, lonely island in the middle of the Atlantic Ocean.  The little town was situated in a deep river valley which continues on into the ocean.  A fort stood on top of the bluffs overlooking both the ocean and the town, protecting it from attacks from the sea.  A steep staircase of 700 steps ran from the town up to the fort.  In 2015, when we were there, I made the steep climb, taking 40 minutes to do so.  As I approached the top, I was so light headed and muscled fatigued that I could only go 10 steps a time between short rests.  It was brutal but I was proud that I made it.

Today’s climb up the Mill Bluff steps reminded me of Jamestown even though there were only 233 steps.  However, when I reached the top of Mill Bluff, I was every bit as fatigued and light headed as I was in Jamestown.  I made it without any rest stops but every 68 years of my life was showing.

The climb was rewarded with amazing views of the countryside and the other ancient sea stacks nearby.  The photos below show you what I saw. 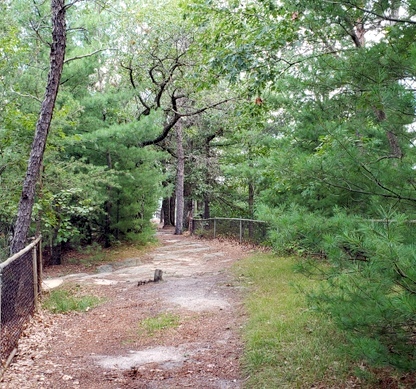 After lunch, Mary Margaret and I took another hike, this time taking a trail that wound through the woods around the base of four other sea stacks as shown in the photos above.  The trail took us through a former cranberry bog that has since turned into a beautiful meadow.  As we walked behind the sea stacks, on the lower elevations, we ran into standing water; the remnant of the recent storms that buffeted this area.

Squishing our way through the water and mud, we continued on and eventually returned to the start of the loop trail.  It was a great hike and we were so happy that we took it.

Tomorrow, we continue our trek to the Pacific Northwest and drive to our next campground, called Glen Hills County Park, about 60 miles east of Minneapolis, Minnesota.

One thought on “Year 2 Day 242 Exploring The Sea Stacks”